​Flamenco Guitars and much, much more by Patricia Steele 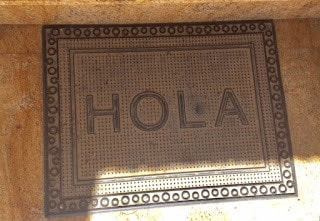 What does Spain call a person who lives in their country for three months?  An expatriate is a person temporarily or permanently residing in a country other than that of their citizenship.  I was romantically inclined to think of myself as an expat, but logically was a hybrid Spaniard returning to her ancestral roots.

My dream had always been to live in Spain and speak Spanish with the locals.  I wanted to eat their food, dance to their music and sink into their culture.  I wanted to inhale their history, touch my heritage and significantly feel Spanish.  It had been a dream that I couldn’t shake loose and after planning it for eight months, I’d managed it.  I lived a ninety day magical existence from the Costa del Sol to Barcelona.  I’m sure the map of Spain was embedded on my soul as I drove over the country, walked their streets, and touched their soil.

Although, footloose with a freedom I had never experienced before, I was confidently tethered from Spain to America; I could always connect to America with Wi-Fi.  Until the night I lost it in a rural village. The feeling of being alone in an alien land slapped me with reality.   I’d heard of going dark, but it had always been my choice.  I had been in the small village of Algodonales for two days.  My free spirit danced through the village and at the end of each day I posted my blog adventures.  That night, when I tapped the publish button, I discovered I had no internet.  Over and over I tried to no avail.

I was in a beautiful village where history seemed inscribed on the walls of old buildings, where the residents hailed one another from cafés and talked on street corners.  The bars served tinto verano con limón (red wine spritzer).  Tapas accompanied drinks; little plates of green olives, slices of pepperoni, and slivers of bread or ham sliced so thin that I could see through it.  I walked over cobblestone streets, spoke Spanish to locals and felt the camaraderie amongst the village.

That night, I felt totally alone because I could not reach out to anyone.  I slept restlessly with the feeling of disconnect.  I finally decided I must have uploaded too much data in a 24-hour period, so I set my alarm for midnight to check.  Nope.  By morning, I suspected the landlady's router needed to be reset.   A sense of relief washed over me when I caught her at breakfast and she promised to reset it.  POOF.  I was back in business.

I was in the village to research flamenco guitars for the fourth book in my mystery series.  My Algodonales contact, Jose Luis, was ill.  I was disappointed, but too adventurous to avoid all the places he’d promised.  I needed to see that flamenco shop.  The day before, it was closed.  Today, I knew it may or may not be open.  Without his Spanish speaking help and introduction, I weighed my choices.  The bus left at 11:00.  I needed coffee first.  My apartment had a beautiful kitchen with a postcard view of tiered white houses, gardens, and potted sprawling geraniums beneath a blue sky.   I meditated.  I drank coffee.  And then I looked at my emails.

What?  I was stunned to find three emails from Jose Luis.  He felt better. Could I come eat dinner with him and his wife (last night)?  Tell me where you are and I'll pick you up and we can eat breakfast (too late).  I called the owner of the flamenco guitar shop (Valeriano Bernal) and we are expected in the shop today.  I gulped the rest of my coffee, sent him a response and dressed quickly.  I was leaving that day, so I had to pack everything.  Now.

I nearly got on that 11:00 bus.  Serendipity.  I rolled my bag down the Calle Piedra to the café and found a table under the massive tree near the immense church.  After ordering my café con leche, I watched people in the Plaza Mayor’s square for about twenty minutes.

I was surprised when Jose Luis whispered my name.  “Patricia?”
“Jose Luis?”  I knew his face from the Hawaiian Spaniards Facebook site where I was one of the administrators.  I had sent him a video explaining my Spanish history.  Now two years later, with the backdrop of the quaint village, his kisses on both cheeks welcomed me with a Spanish culture I would never forget.

He led me through the labyrinth of cobblestoned streets where I’d explored the day before. The entrance into the flamenco shop mimicked the shape of a guitar.   The owner’s son guided us up a long stairwell into the shop where I saw flamenco guitars in various stages.  He explained each step and I thought I couldn't be more in awe, until he picked up a guitar.  Once he began to strum, my feet began to move and I wished I wore flamenco shoes.   When he handed me the guitar, I took it.

Afterward, Jose Luis led me up the main street of the village.  I had walked the length of the street yesterday.  Twice.  Villagers filled water bottles in fresh water springs from the hills.  Above the village from a hilltop mirador, I saw houses below me in whites and pastels.  Other villages nestled at the foot of nearby mountains.  I wanted to sit there the rest of the day.

My day of research was more than I could have hoped for; I learned about flamenco guitars, saw them being made and held one in my hands.  I listened to a flamenco guitarist strum Malagueña and swooned with the sounds.  Bar Conijo served us Ensalada Mixta (tomato salad), pollo (chicken) we drank tinto verano.  The feeling of being unplugged the evening and night before made me realize that we are beings whose aloneness is not always what we imagine it might be.
​ 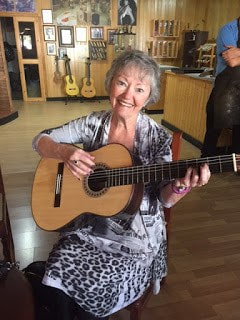 Add your comments about this story on the Blog page.​
​