On safari in South Africa, there was no room for my roommate and me in the Timbavati Game Preserve’s King’s Camp’s luxury rooms, so we stayed in the owner’s home on the second floor, in the guest suite at the back. We had a private stairway to our porch. Nice, but we were not with our friends, and not allowed to be on the ground that far from camp without a vehicle, so we were sort of isolated. No real complaints, though. Our shaded balcony provided a tree-house view of our natural surroundings, and we could see the “camp” in the far distance.

From our perch, Howler monkeys screeched, rather, “howled” at dawn, jolting us awake. We could almost see them leaping around in the nearby, shadowy trees, sounding like 300 fingernails on the blackboard on steroids. Once the sun was up, they’d quiet to chatter, so we could hear the cacophony of a vast variety of birds, and now and then some large animal grunting—perhaps even wild boar snuffling—all unfamiliar and like being in a surround-sound National Geographic special.

When we weren’t going on an early morning safari, we’d get up leisurely, shower, dress, have a cup of tea on our balcony, and, eventually, around nine, one of the drivers would come to gather us for the group breakfast. We’d spend the day exploring with our friends, and were returned “home” after an early evening safari and “sundowners” out in the extensive protected lands.

“Sundowners” was a delightful occasion. While we were checking out the incredible animal sightings on our dusk venture, another vehicle would go out to where there would be a spectacular view of the sunset, and set up appetizers, drinks and chairs for us to enjoy while the sun did her spectacular swansong of the evening. By this point, we had seen almost all of the “Big Five”. All we were missing was the lion. There was apparently a large male who lived nearby who had been avoiding us. 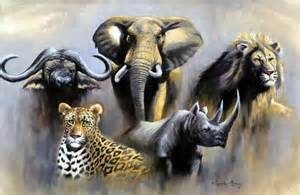 The Big Five
King’s Camp, itself, not our place, was surrounded by a high, single wire, about 7’ off the ground—not a fence—to discourage, though not totally prevent, the elephants and giraffes from trampling the humans, landscaping, pool, etc. However there was nothing keeping the lions and other cats, rhinos, kudus, etc. out, though they tended to avoid people, generally, and live their lives. You might be in the covered open-air dining room, and observe a herd of kudus stroll through the grounds, or a snake skirt the pool. It was their home, not ours. One morning, a kill was being devoured by a family of cats in the distance.

Our viewing transports were specially designed safari vehicles. Open-air, they had tiers of seating—four rows—so everyone could see. An extension built out over one of the front wheels allowed the tracker could go out front a bit to peer at footprints and see who was around. We’d bounce down steep hills, ford through swift waters, haul over huge rocks, and creep along dusty, dirt roads, hanging on, hyper alert, despite the rough crashing about.

Our guides reminded us that it was indeed a privilege to witness these amazing creatures on their own turf. We were their guests, on their terms.  We were clearly instructed to NOT stand up, EVER, or speak, especially if near animals, and if absolutely necessary, quietly. Either startled the animals, and they were wild and unpredictable.

The last day we were to be picked up pre-dawn to hopefully catch a glimpse of the lion.  It was still dark and we were sound asleep when the “kombie” beeped under our second-story porch, calling us to come. There had been no wake-up phone call as usual, and it was even too early for the Howlers, who had also been startled awake by the abrupt beeping. The monkeys erupted into a panicked, hysterical screaming, quickly escalating into ear-splitting, high-pitched banshee mayhem. The guides and our friends had apparently started off then realized they’d forgotten all about us, and sent one vehicle back. Eager to get there while the animals were still on their pre-dawn prowl, hoping to see the BIG CAT, we jumped into some semblance of clothes, and warm jackets, with no time to even brush our teeth, or, in my case, tame my mane, as it were. It was a fluffy mess, like a giant honey-brown dandelion, all a-puff. Pre-dawn, pre-tea, pre-groomed, pre-civilized.

The guides were sorry, and apologized, and we jounced off “gamely” in pursuit. 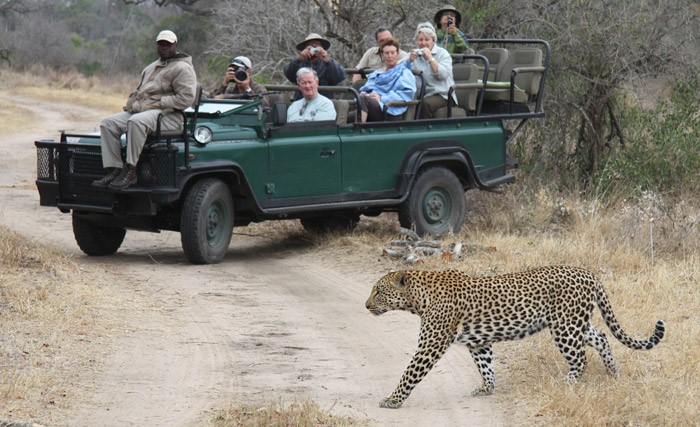 As I mentioned, there had been no sighting of the King of the Jungle, not for days. Hunkered down, now very wide awake thanks to the early morning chill and adrenaline rush, I began to get excited and scan for the lion in the eking dawn light. I was sitting in the front seat, next to the driver, for maybe 15 minutes, when OMG! We whispered to a stop and stared.

Was I still dreaming? There HE was in all his glory, calmly standing right in front of us, looking straight at us, with the sunrise’s now exploding light directly behind him, providing a magical aura of warm, orange light, emphasizing his magnificence.

I apparently rose up out of my seat, awe struck.

The driver yanked me back down and smack out of my reverie. What just happened?

Later, telling the story at supper, one of my travel mates teased me, sweetly describing the phenomenon something like this, “Her glowing mane mirrored his as they gazed lovingly at each other for a brief moment—each entranced.” (She may have tippled a glass or two with dinner.)

I am thankful for the (now obviously) alluring magic of my untamed, bushy mane that, perhaps, momentarily seduced him out of hiding, and for our momentary spiritual connection. (Oh, I also appreciate that I was not breakfast for the King.)